Installed CentOS into a VirtualBox virtual machine this evening. I recommend installing the Guest Additions into your virtual machines. Simple to do under Ubuntu. A little more involved with CentOS, but still easy enough.

Google is your friend. Here it is quick and easy: 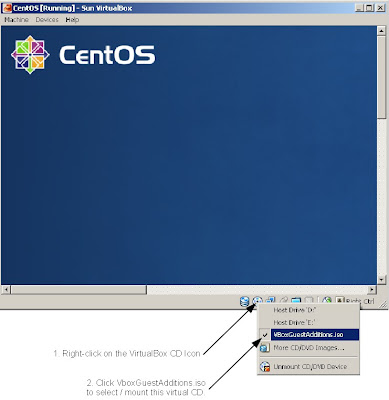 That's pretty much it. More pointers can be found here.
Posted by chronicon at 10:22 PM 1 comment:

Recently did a network upgrade from Ubuntu 9.10 to 10.04 LTS (desktop edition). The upgrade didn't work initially--there was some conflict with XUbuntu which I also had installed under 9.10. I removed all traces of Xubuntu and xfce, and then the network upgrade worked fine.

10.04 LTS is a fine distribution. I really like it. It's been a while since I used Ubuntu and one of the things I enjoy about it is that things just work. Wireless set-up, which had been so painful previously, was a breeze and the connection is fast! Much faster then it had been under XP on the same machine.

Well, to the point. One of Ubuntu 10.04's failings was the boot up splash screen!! So incredibly ugly! I should have taken a picture. The word UBUNTU was outlined in some kind of psychedelic malaise. Painful to look at. Not a show stopper, but please. This isn't a hack distro, this should be slick, professional, pleasant in every way.

Are they working on a fix? I know from bug reports that I am not the only one who's seen similar issues. I don't know, but there is a workaround. I just applied it on this very system I am using to post this entry. Here it is, step-by-step for new users. I used "Alternative One". The only thing I did differently was change screen resolution entries from 1280x1024 to 1024x768 to accommodate the maximum resolution of this relic of a laptop I am using. Here it is, fix that ugly boot logo in Ubuntu 10.04 (Lucid Lynx):

How to Fix the Big and Ugly Plymouth Logo in Ubuntu 10.04

I should post the fun I had doing a network upgrade from Ubuntu 8.04 LTS Server to the 10.04 LTS edition. I'm sure it would have been painless if I wasn't booting from a software RAID1 drives. I hope I can recall how I made it work so I can post for reference the next time I upgrade and it happens again--which of course it will. I have no doubt. It always does.

Oh, and I should mention I am having excellent success running XP from VBox OSE on this dinosaur. I can't believe it works, but it actually works very well!

Well, time to reinstall the Xubuntu desktop.
Posted by chronicon at 12:28 PM No comments: